The Nuko Club, originally created by Miu Amaha, is composed of two members in the start of the anime, Amaha herself, as well as an underclassmen named Sana Inui.

The principal and the student council initially refuse to acknowledge The Nuko Club as an official club, the result of only two members, 4 members short of the required amount.

The club was in danger of being abolished due to student complaints about animals. Shingo's good nature couldn't stop him from helping Miu, and he joined the club. Eventually following him were his sister, his "maid" and Airi.

After Shingo, Sakuno, Ange and Airi joined the club, the member total was at 6, the number of members required for a club to be officially recognized by the principal and student council, where Miu was very grateful to all of them for helping her out.

The purpose and main reason The Nuko Club was put into existence was to take care and nurture animals, let it be wounded, tired, weak, feeble or just hungry, The Nuko Club takes care of all animals in need, the owner, Miu Amaha, collected funds for the club to spend via a part time job as a maid(?) at a cafe. 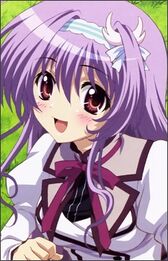