She is in Shingo Uryū's class and tries to help the students from Kagamidai Academy assimilate. Her father is Japanese and her mother is British, but she speaks only Japanese because she was born and brought up in Japan.

She has a cheerful personality and is very good at housekeeping tasks such as cooking and cleaning, but is weak at general educational subjects such as English and mathematics. S

he later becomes Shingo's maid that she refers to him as "master" (旦那さま 'danna-sama') (in her storyline of the game and, temporarily, in the fifth episode of the anime).

In the originally pc version, if the player choose Ange's route, she will eventually start to live with Shingo where she will give Shingo a morning kiss and further more in the story every morning. At the end, Shingo and Ange get married (which now makes her Angelina Nanatsu Uryū), they become a teacher at the school and Ange open a maid class for the school while Shingo helps her along. 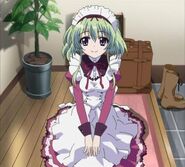 Angelina in the anime

Community content is available under CC-BY-SA unless otherwise noted.
Advertisement